​Thank you to all who purchased tote bags and t-shirts with A.A.B.A. Because of your generosity, we raised hundreds of dollars and donated to a school and orphanage in Shkodër, Albania this year. At the orphanage we bought a heating and air conditioning system and at the school we bought uniforms for the children. This would not have been possible but for Haki Zaganjori, father of one of our AABA members Sam Zaganjori, who was kind enough to go to Shkodër and facilitate the donation of these items. Below is an article publicizing this heartwarming accomplishment:
A Small Contribution, A Meaningful Gift
By Arben Cokaj, August 23, 2017

There are times when without upsetting your lifestyle, with a symbolic donation, you can accomplish precious and meaningful things. An old friend of mine from college times, Albana Qinami, who these days lives in the U.S.A., wrote to me a few days ago, in the evening, actually midnight… “We have an association of Albanian-American lawyers in Massachusetts, she said, “we contribute $500 each year for two schools or educational centers for children in Albania. This year we have decided to make a modest contribution for the Orphanage for Pre-school children in Shkoder…”

“This is the one close to our hearts this year” - she added. “Can you please contact them and ask what would they like to be bought with $500?” Then she explained that the secretary for the lawyers association was Bora Hajnaj, whom I contacted right away. Bora later explained that the father one of her colleagues, Haki Zaganjori, was coming to Albania for vacation, and he was going to deliver the money.

Along with my brother Dr. Dashamirin, we reached out to the principal of the orphanage, Arlinda, who very politely and amicably explained they needed an air conditioner because the old ones were ruined, and the children were hot during the summer and cold during the winter months. The orphanage also needed some bed sheets for children’s beds. We first went and asked about the air conditioner.

Gjeloshi, the owner of the electrical appliances store in the neighborhood of Rus, Shkoder, explained that energy efficient air conditioners, for a room 4 by 4 (meters), with heat for winter time and cold air for summer months, were somewhat expensive, 533 euro for one of them. “Well we only have 500 dollars” - we explained to Gjeloshi. Since the air conditioner was going to an orphanage, he accepted. “Okay, he said, I will give it to you for 500 dollars.” I reached out to the lawyers' association, and they accepted.

Later that day, while waiting for Haki to arrive in Shkoder, Dr. Dashamiri said that he will buy the bed sheets as a gift to the orphanage. Alrinda explained where we could purchase them, and the company called “Kollacej Tessuti” specializing in knitwear and located at “Bania e Vogel” street in Xhabiaj neighborhood in Shkoder, promised to sew the bed sheets for free; 20 sets of bedsheets for single beds - 10 for girls and 10 for boys. As such, both companies, which were selling the requested products, were also making their own donations.

We needed a lawyers association in the U.S.A., to remind us of our  humane side, and to awaken in us in Albania, the desire for a small contribution, which gives meaning to someone’s life, in this case, the children at the orphanage for pre-school children in Shkoder.

Inspired by the above mentioned contribution, I thought it was the right thing to do and write this short awareness raising story, to remind each one of us, a businessman or not, an Albanian immigrant in the western world, or Albanian companies, to remember to contribute in these type of cases, without upsetting their lifestyle or economic well being, to make a donation for people in need.

Don’t forget, there are many people that are in need, a symbolic donation, a small amount of money, can improve someone’s life! Thank you to all who contributed in this case! 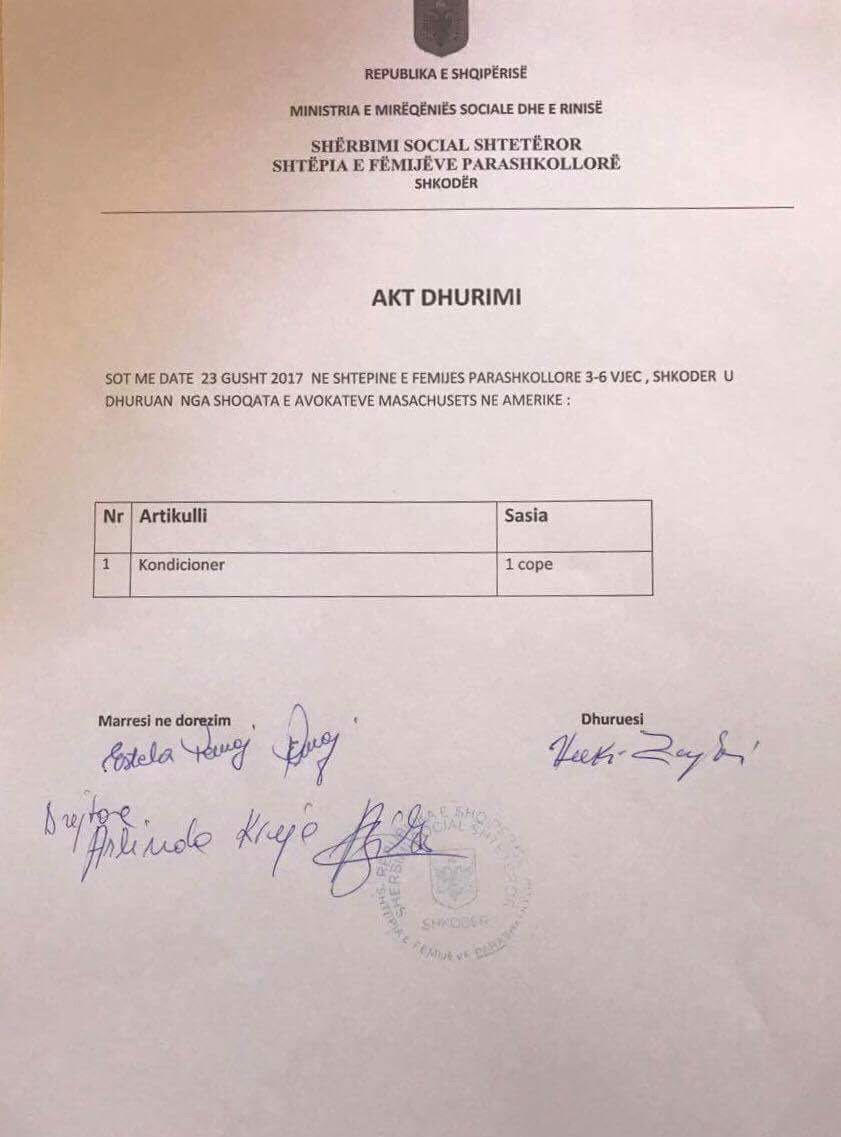